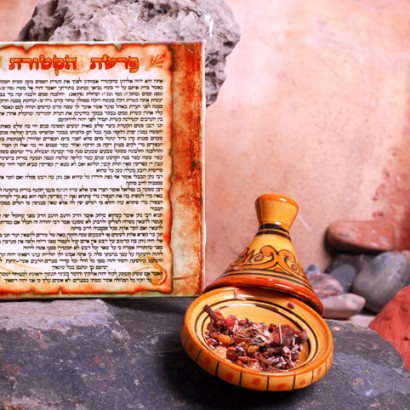 The Portion of the Incense

For protection and success, for financial well-being and wealth “that he shall never be lacking of bread”

It is brought down in the Holy Zohar  (portion of Vayakhel) and in the Midrash Tanchumah: “the offering of the incense in the Holy temple was one of the mitzvoth (commandments) of the Temple service. Its secrets and merits are great and wonderful and beloved by G-d, more than all the sacrifices and prayers.

It is brought down in the Midrash: At the moment that Moses went up to Heaven to receive the Torah, the Angel of Death revealed and handed to Moses the magnificent and awesome secret of the incense that has the power to eradicate death from the world. It is further brought in the Holy Zohar:

Rabbi Shimon Bar Yochai said: A decree stands before the holy One blessed Be He that whoever studies the portion of the incense will be saved from all evil matters, spells and dangers, from evil decrees and death and will not be harmed, that the power of judgment will not be able to rule over him.”

Additionally: Rabbi Pinchas said that once upon a time I was walking on the road and I met Elijah the prophet and I asked that he tell me something that is good for mankind. And he said to me: the Holy One Blessed Be He decreed a decree that at the moment when the angels list the sins of man, if that same man is involved in the portion of the incense, the angels immediately stop their presentation and only mention his good deeds and discuss his many merits.

The Merits of the Incense

Removes death from the world Saves one from all evil decrees and from illness. Cures the sick. Nullifies spells and is saved from being consigned to Gehenom. Finds favor in the eyes of all who see him. Is worthy of wealth and financial success and will never be found lacking.

There are no reviews yet.