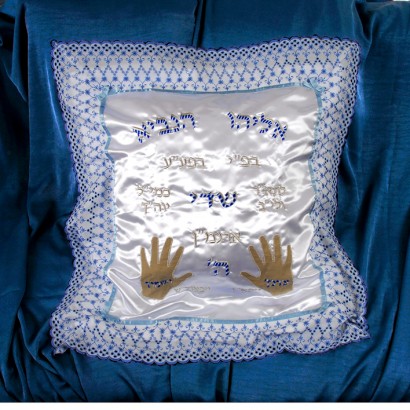 A blanket for a baby

From early on the Kabbalists acted in awe deciphering the codes of the”defence system” for a newborn baby and mother.

The aggressiveness of the “mazikim” (those who wish to cause damage) towards the newborn child grows stronger from day to day from the moment of birth until the circumcision since “this opposite this created G-d” the power of holiness and the power of the “other”. As the day of the circumcision draws near the apex of holiness which is present as the baby enters the covenant of Abraham grows stronger and the power of the “other” tries to overtake it by attempting to disrupt the possibilities of circumcising the child. We take many means in his defence. Who amongst us does not remember the golden “chamsah” which is pinned on to the baby’s clothing, the book of Psalms which is placed on the baby’s pillow and the learning of the Zohar- using the complete system of defence at the climactic moment- the night before the circumcision.

In a novel thought which came to me from a variety of amulets which were written during many generations.

I present you with a beautiful covering for the circumcision ceremony complete with hidden codes for the baby’s protection and which includes an appliqué of the unique and special linen “chamsah”. And it is written in the books of the Kabbalah “Chesed L’Avraham”, “Ain Yaakov”, Ha-ach Nafsheinu” and “Midbar Kedamot”:

“It is a wonderful “segulah” for whomever wears the linen garment and no magic can rule over him and no evil or evil eye or evil spirit can do him harm. And he who wants to be certain should try this by wearing the baby’s linen garment and he will be protected from all harm as a result of the linen “segulah”

There are no reviews yet.